We have an Erection!

The 60BBL Fermenters have been erected into place. So you can say we've got an erection. :D Oh yeah we do! 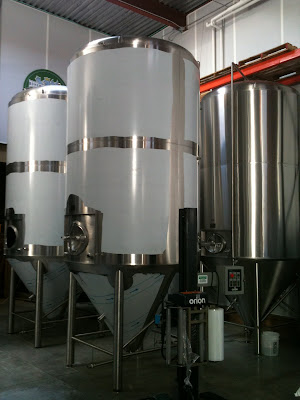 Posted by Bohemian Brewery - Salt Lake City at 7:31 AM No comments:

Two new 60bbl fermenters arrive along with a 90bbl lagering tank from Specific Mechanical. We're giddy like a school kid in a candy store. Stay tuned. 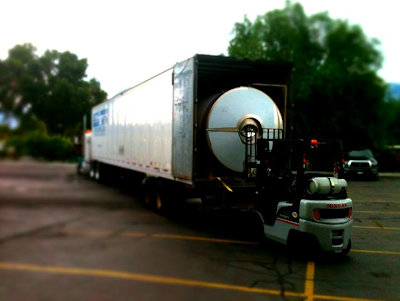 Posted by Bohemian Brewery - Salt Lake City at 7:40 AM No comments: 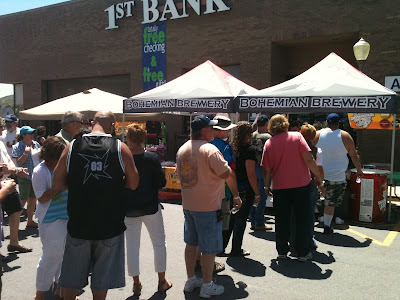 Today was the 3rd annual Evanston City Beer Fest. This cool little town on the southwestern corner of Wyoming decided to welcome the Rocky Mountain Brewers out for a great sunny day out on their historic Main Street for some great beer, food and a Big Wheel race! It was a blast and this year it has grown like crazy. Being only and hour and a half from Salt Lake it brought out a ton of Utah folks.
Here's our never ending line which started right away at our tent.
Posted by Bohemian Brewery - Salt Lake City at 6:19 PM No comments:

Looking back at Tour de Brewtah

Posted by Bohemian Brewery - Salt Lake City at 7:36 AM No comments:

Selling the Session from Draft Magazine

There’s buzz about low-strength beer. But is there any money in it?

Commercial Suicide. That’s the name of the first beer that left Jester King Craft Brewery in Drip-ping Springs, Texas, last October. It’s a dark ale made from roasted malts and partially aged on oak before blending and packaging. Sounds like one any geek could love. So why such a damning moniker?

Maybe because it’s a mild of only 3.5% ABV—not a beer many American craft breweries would hang their hats on. What’s more, Jester King is among a scattered handful of independent brewers and pubs across the U.S. and Canada emphasizing lower-strength beers meant for drinking in quantity.

What are they thinking? Have we not been clear?

Through informal polls, beer-rating Web sites, year-end lists, and—most important—the dollars we spend, we have made our preferences known. We like strong beers. We drink them. We hoard them. We pay extra. Scan the draft list at your local taphouse, and more often than not you’ll find it top-heavy with higher alcohol beers and very little, if anything, below 5%.

So what on Earth would lead a few brewers and pubs to turn their backs on us and dedicate themselves to weak beer? Have we not proven that we can session anything?

“First off, I don’t buy that,” says Lew Bryson, a Philadelphia-based drinks writer who in 2009 launched a blog-based campaign called the Session Beer Project. Bryson said he’s often heard the argument that you can session any beer, as long as you drink slowly enough, and still walk home straight afterward.

Bryson launched the project after a chat with Bill Covaleski of Victory Brewing, which had been offering a few lower-strength beers without much acclaim. When Bryson asked why those beers weren’t better known, the brewery’s founder said, “It’s your fault.”

Covaleski’s point: The media and geeks would rather talk about the latest double-hop-bombs or barrel-aged sour ales, while proper drinking beers fly under the radar. So Bryson launched his Session Beer Project to pay them more attention.

Which brings us to an interesting question: Is the name Commercial Suicide accurate?
“There are definitely those who don’t really get these beers,” said Ron Extract, co-owner of Jester King. “We’ve had some people tell us that the name ‘Commercial Suicide’ was apt, others who called it ‘watery’ or said it didn’t ‘pack enough punch,’ and even one customer who asked us if/when we might be making a full-strength version.

“At the same time, though, we’ve also got a few places that are pouring it consistently and going through it at a good clip,” he said. “All in all, this beer definitely has its audience.”

Are low-strength beers the next big thing? Maybe not. The Web site Ratebeer.com surely has the most complete database of available craft options over the past several years, and its numbers tell a boozy story. In 2000, the average alcohol by volume of new U.S. beers was about 5.7%. That number increased steadily over the past decade, reaching about 7.2% in 2009.

Despite the trends—or perhaps as a reaction to them—“session beer” has become a regular part of insider chatter. It was apparently on the mind of Dogfish Head founder Sam Calagione during a recent interview with Atlantic Monthly. The magazine asked him, “What’s a beer trend that you wish would go away?” His two answers were “ice-cold beer” and the idea “that session beers and extreme beers cannot co-exist peacefully on the same shelf or within a brewer’s portfolio.” (Although it’s not clear who, if anyone, has ever advocated such an idea.)

It’s worth noting that low-strength beer is not exactly rare in North America. Three of the top U.S. sellers—Bud Light, Coors Light and Miller Lite—each contain 4.2% alcohol. Yet the craft movement began as a reaction to products like those, which might explain the reluctance of some brewers to stray below the 5% line.

Aside from light corporate lagers, is there any money in session beer?

“Yeah, of course,” said Steven Pauwels, brewmaster of Boulevard Brewing in Kansas City, Mo. “It’s volume and price. That’s how it works.” Basically, per-beer profits might be slimmer but you sell a lot more beer. “You get the same revenue you get with lower volume and higher margin,” Pauwels said.

Boulevard has gained national recognition for its Smokestack Series in 75cl bottles, but the Midwestern brewery remains the house that Unfiltered Wheat built. The Wheat—low on bitterness but big on bready, lemony flavor at 4.4% strength—accounts for more than 60 percent of Boulevard’s sales.

“We sell a lot of it, and that beer is paying the bills for us,” Pauwels said. So session beer is not necessarily Commercial Suicide after all. •

Posted by Bohemian Brewery - Salt Lake City at 11:10 AM No comments:

Bohemian Brewery on the DABC Show

POSTED // 2011-07-11 -It's the second episode of The DABC Show (Drinking Alcoholic Beverages Constantly), wherein myself and Steve Koonce visit local joints that make great beer, drink a few and slap together a web show about it. This time: Midvale'sBohemian Brewery.

There's drinking, eating, more drinking and a satellite throw to Steve at some beer festival in Idaho Falls. Then, some more drinking--and if you're not careful, you might even learn something ...

Posted by Bohemian Brewery - Salt Lake City at 10:19 AM No comments:

Bohemian Brewery partners with Splore, a local non-profit supporting them in their adventures. The Harvest Moon Benefit is a annual event to raise money for Splore. Check out the video to learn more and visit them at www.splore.org This is a really great organization. This years Harvest Moon Benefit will be on October 15th, 2011.
Posted by Bohemian Brewery - Salt Lake City at 2:02 PM No comments:

Czech on the east coast like our Pilsner not our Pilsener.

Americans CAN Make Pilsner
Today is a very special day, it is now 3 years since the then Soon To Be Mrs Velkyal became Mrs Velkyal in a wonderful Czech civil ceremony in the New Town Hall in Prague. Of course "new" in Prague is an entirely relative term as it dates from 1419 and was the site of the first of the three defenestrations for which Prague is famed (minor political aside - the sooner the Czechs defenestrate Vaclav Klaus, the better). Tomorrow is then Mrs V's birthday - no chance of ever forgetting either event really - and so her best friend came up for the weekend from Greenville and being a top human being all round, she agreed to bring me a selection of brews which as far as I know are not available in Virginia, or at least not in Charlottesville. 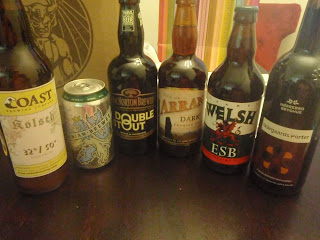 The eagle eyed among you will see a can in that selection. The can is a Czech Pilsener from the Bohemian Brewery in Utah. 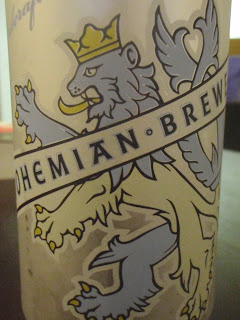 I was very much looking forward to continuing my search for the perfect American made Bohemian style pilsner, especially when I read through the information on their website. The website says that they do a double decoction mash, lager their beers for 5 weeks and don't pasteurise their beers. The details on the Pilsener (sorry, using their nomenclature) were also encouraging, just 4% abv, so I am assuming desítka territory, using only Saaz hops and fermented with the same yeast as the old Braník beers. 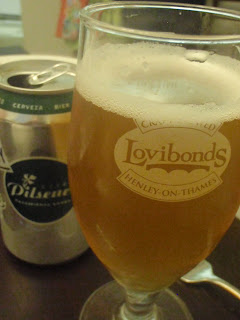 So how was it?
The body was medium, perhaps being ever so slightly thin in the finish, otherwise I really, really enjoyed this. That is pretty much my only issue with the beer, but given my experience of American pilsners, I really want to try this on tap as opposed to in the can. 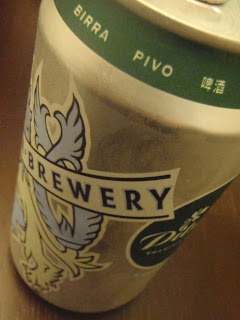 Unfortunately it isn't available in Virginia yet, so when Mrs V and I head down to South Carolina, I will be buying more to put in the fridge, and when we go to Florida in a couple of weeks, taking plenty of cans for the beach. An excellent beer, and I will now have to try the rest of their range!
Originally posted on Fuggled: http://www.fuggled.net/2011/07/americans-can-make-pilsner-cant-spell.html
Posted by Bohemian Brewery - Salt Lake City at 9:22 AM 1 comment:

Come show off your boating skills in the Anything That Floats Race. Cardboard boxes, old bathtubs, pool toys - if it can float it's fair game!

To support a team or individual, DONATE HERE.

If you prefer to stay on dry land, join Splore at the Big Bend Campground from 5PM til dusk. Cheer on your favorite racers, play family-friendly beach games, listen to music, and enjoy $5 burgers and brats, and beer from a local brewery. Admission is FREE!
Posted by Bohemian Brewery - Salt Lake City at 2:12 PM No comments: