Canned in the USA

Here in Sonoma County, it looks like the last of the rain has fallen for the year. The ground is no longer moist to the touch and the forecast is nothing but sun and increasing temperatures. Looks like it’s time to start making weekend plans that include long stretches of outdoor activity (not that a Bay Area winter exactly chases one inside). When heading outdoors, a bottle can be a bit of a hassle: heavy, breakable and no easier to carry once emptied. Thank God craft beer is becoming increasingly available in cans. How much more available? Well you’ll just have to keep reading to find out. 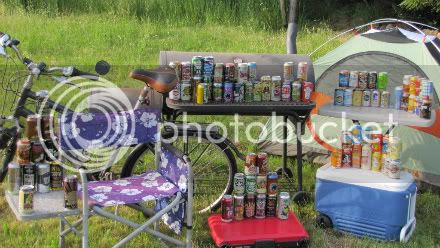 While many of us grew up with nothing more than industrial lagers in cans, the variety of beer available in cans today is staggering. From light pilsners to hoppy IPA to thick and viscous imperial stouts, everything a beer lover could want can be found in a can. Let’s take a look at a sample of what might be out there for each individual’s taste, or for each situation. 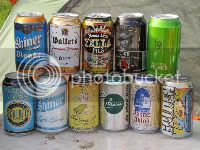 On the hot days, a crisp pilsner (or reasonable approximation of a pilsner) may be exactly what you’re looking for. The pilsner style is definitely represented within the canned market. The style is made for cans with its subtle hopping needing the added protection of the can’s aluminum. Additionally, these beers, meant to be served cold, will ice down in no time. 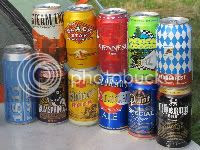 If pilsners are a bit too light for your taste but you still want the crisp flavor of a lager, there are still plenty of options. Bock’s, amber lagers, Oktoberfest märzen; they’re all coming in cans. As a lover of märzen, the Santa Fe Oktoberfest jumps out to me, but it may also be the can. (See if you can identify their cans in the pictures of this article. I love their simple style). Whichever way you go, look for a more full-flavored lager than what your dad packed in the cooler. 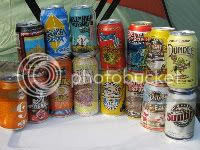 Anchored by the success of brands such as Blue Moon and before that Widmer, the wheat beer style is almost a must have in any summer cooler. Be it a flavored-wheat containing fruit, spices or both, or simply a lighter ale brewed with the same result in mind, these are craft brewing’s answer to the traditional lager and pilsner. Light and refreshing with more body and signature ale esters, hot weather doesn’t stand a chance when you’ve packed these cans. 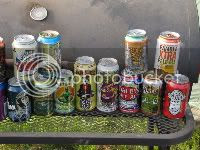 Chances are, if you’re reading this article, you’re a fan of hops. This is where you’re invited back into the conversation as the pale ale category is full of canned beer. With the standard for pale ale, Sierra Nevada, starting their own canning operation later this year, it’s nice to see a wide variety of pales to quench our thirsts right now. It’s in this group that you’ll find the first craft beer I ever enjoyed in a can, and I was immediately won over. Good to see ya Dale. 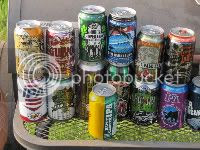 The hops really step it up a notch with the IPAs available in cans. These are no light bodied faux-IPA either. From one of the first beers to make me truly understand what hops were (Hop Ottin IPA) to one of the hoppiest beers I’ve ever had anywhere (Oskar Blues’ Gubna), the IPA category is bursting and is almost becoming the go to style in terms of canning. As the general public clamors for more IPA, it’s only a matter of time until this stack of IPA cans rivals and surpasses those of pilsners and lagers. 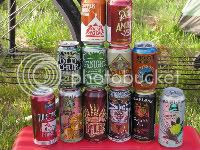 As we get into the darker colored beers found in cans, our styles begin to fall apart. Those of amber hues range from classic amber and red ales to Scottish Ales, Imperial reds and Belgian-styled beers. Keep these in the cooler for when the sun begins to creep behind the horizon as their richer malt flavors will go well with that campfire dinner. 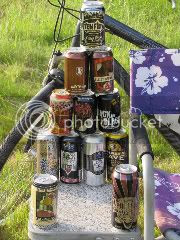 Last but not least, as the sun sets on this canned collection, we get into “the dark beer.” As with the ambers, the styles fall apart completely here. Porters, Black IPA, Stouts, and even Imperial stouts, they can all be found in cans. These are the beers that will surprise most who are new to cans. The idea of an imperial stout, coconut infused porter or even a brown ale may seem odd, It even looks odd when pouring out of a can, but the beer is fine. In fact, as mentioned with pilsners, these bigger beers can stay fresh longer in a can. Aging canned beers is a questionable proposition. I’ve aged cans of Ten Fidy for a year and the result wasn’t as noticeable as I might have expected.

Wherever this summer takes you, rest assured knowing you have a wide selection of cans to pack in the backpack, throw in the camping cooler or just sit back at home and drink.

Posted by Bohemian Brewery - Salt Lake City at 9:26 AM No comments:

Recycling Cans - How it all started.

How Aluminum Can Recycling Started 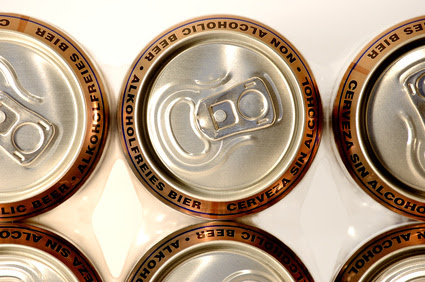 How Aluminum Can Recycling Started

Metal cans were originally developed to store food for soldiers to carry into the field. In 1795, the French government offered a prize of 12,000 francs to anyone who could invent an effective means of preserving food, according to the Can Manufacturers Institute, the trade association of the metal can manufacturing industry. Nicholas Appert, who won the prize, packaged partially cooked food in air-tight glass bottles sealed with corks. Early cans were made of tin, which corrodes when exposed to the acids found in soft drinks.

Aluminum, which was discovered in the 1820s, is the most abundant metal on Earth, according to the environmental group Earth 911. Aluminum is made by mining deposits of bauxite ore and refining it into aluminum metal using electricity, according to the U.S. Environmental Protection Agency, or U.S. EPA.

Aluminum is a durable metal that can be used over and over. Earth 911 reports that 50 percent of all aluminum cans are recycled. Aluminum cans are portable, lightweight containers that keep beverages cold. Their rigid structure keeps the cans from being broken or crushed during shipping. According to the Can Manufacturers Institute, manufacturers constantly change the shapes and sizes of aluminum containers. The EPA estimates that 99 percent of beer containers and about 97 percent of soda cans are aluminum.

The benefits of recycling aluminum cans include saving money and reducing energy consumption. The EPA estimates that recycling cans saves about 92 percent of the energy needed to produce aluminum from bauxite. According to the Can Manufacturers Institute, recycling cans minimizes consumer and production waste. Recycled aluminum cans can be back on store shelves as new beverage containers in about 60 days, according to Earth 911.

Aluminum beverage containers are the largest source of aluminum in the municipal solid waste stream, according to the EPA. People can recycle aluminum to raise money. An empty aluminum can is worth about 1 cent. Earth 911 reports that the aluminum industry pays out about $800 million dollars for empty aluminum cans each year (Reference 5). Aluminum recycling allows charitable organizations to fund local projects, such as school improvements. The Cans for Habitat program, a joint partnership between the Aluminum Association and Habitat for Humanity International, supports a network of drop-off locations to recycle aluminum cans to help raise money to build affordable housing for low-income families around the country, according to Earth 911.

Facts about recycling your cans 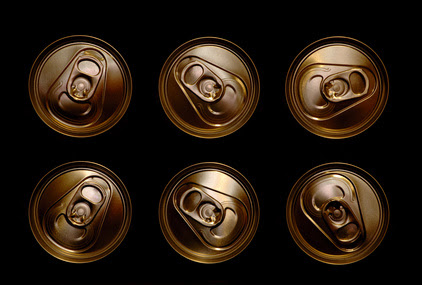 It may be hard to believe that the ubiquitous aluminum beverage cans have only been around since 1965, according to Earth911.org. Aluminum has grown from an industry producing a mere 340,000 tons of municipal solid waste in 1960 to 3.4 million tons in 2008. Aluminum is the material of choice for 99 percent of all beer cans and 97 percent of all soft drink cans, based on U.S. Environmental Protection Agency (EPA) figures. With the amount being generated, you may wonder how much is being recycled.

Recycling aluminum cans represents a tremendous energy savings. The EPA estimates that recycling cans uses less than 10 percent of the energy of manufacturing cans from virgin ore. The energy savings are due in part to how aluminum is recovered. Bauxite ore must be mined and then refined in order to make aluminum cans. According to the Mineral Information Institute, Australia is the world's top producers of this ore, with the U.S. contribution only negligible. The energy savings include the cost of importing aluminum.

Recycling of aluminum cans has grown steadily over the years. In 2007, nearly 50 percent of the aluminum cans generated was recovered through recycling. If you are one of the many Americans who recycle aluminum cans for money, you had your share of the approximately $1 billion in revenue Americans make each year, according to the Can Manufacturers Institute.

One of the most important environmental benefits is the reduction of landfill waste when you recycle rather than discard aluminum cans. The Can Manufacturers Institute estimates that recycling prevented 1.7 billion pounds from being added to the nation's landfills. According to Earth911.org, aluminum can be continually recycled. The recycled products are durable and reusable. The turnaround from recycling to a new can of pop or beer is about six weeks, according to the EPA.

Earth911.org can assist you in locating a recycling center in your area. You should also contact your waste management service to look into recycling options in your area. Curbside recycling is available in many communities, making it an easy option for recycling your aluminum cans. 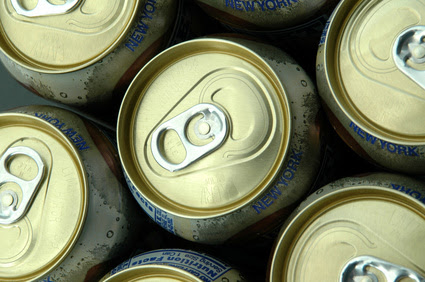 The average aluminum can in America has 40 percent post-consumer recycled aluminum, according to the U.S. Environmental Protection Agency (EPA).
When you throw away aluminum products, such as beverage cans and food containers, they end up in landfills. But if you recycle them, you conserve energy and help to prevent landfills from increasing.

The aluminum can recycling process starts with the consumer, who cleans and sorts aluminum cans and then places them in the proper container for pickup or takes them directly to a recycling center. Workers then sort out high-quality aluminum items and discard any useless bits, such as pieces contaminated by dirt, wood, glass, plastic or other foreign materials. Workers melt down the selected pieces and shape them into ingots, which they later roll out into large sheets. Manufacturers buy the sheets and use them to make aluminum products.

Recycling aluminum cans reduces waste that contributes to the problem of overflowing landfills. Recycling cans also conserves energy because the aluminum-recycling process uses less than 5 percent of the energy that the manufacture of new aluminum from bauxite ore requires, according to the Louisiana Department of Environmental Quality.

The increasing use of plastics for beverage containers and other products is lowering the demand for aluminum products, according to industry sources cited by the EPA. But demand may increase as car manufacturers develop new, lighter car technologies in their efforts to increase fuel efficiency.