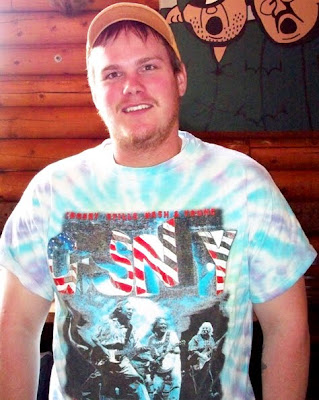 Bobby Jackson made his way to Salt Lake City from Vermont in September of 2007. Since then, the 23-year-old landed a spot as Head Brewer of the Bohemian Brewery and scored the brewery a silver medal for their Cherny Bock at the 2008 Great American Beer Festival in the German-style Schwarzbier category. Jackson is quickly making a name for himself and the brewery. He’s highly regarded by Salt Lake City’s craft beer drinking scene as one of the best brewers of lagers.

Head brewer of Bohemian Brewery, Bobby Jackson is only 23 years old, making him the youngest head brewer in the state.
Photo: Adam Dorobiala

SLUG: How did you make your way into the brewing industry?
Jackson: I went to the University of Vermont and pretty much spent the majority of my time there homebrewing. I had been looking into brewing education, and it just happened that The American Brewers Guild was re-filming their DVD, so they were doing a residential program the summer after I had graduated. That was all followed up by a five week apprenticeship at Otter Creek.

SLUG: A lot of people know what their first beer was, but what was your first “real” (micro brewed) beer?
Jackson: It was probably 11th grade. Someone’s parents always had Redhook ESB around—it was rich people beer. But when you are that age, beer is beer. I was typically drinking a lot of Pabst and Keystone Light.

SLUG: Only brewing four beers must be rough on stretching your creative abilities. Have you ever wanted to do more?
Jackson: Definitely—every now and then I get a little antsy. I did release the Chocolate Cherny last winter, and then brewed the floor-malted pilsner recently. Only getting to do them now and then makes them so much sweeter. It also helps me focus on the four beers that we have on hand and keeping them consistent and making them the best beers they can be. That way I never can say, “I wish that I could have done this or that differently.”

SLUG: How would you describe your experience in dealing with Utah’s legislature?
Jackson: It’s not so much “dealing” with the legislature, it’s more trying to understand them. It’s so backwards. All this new stuff with private clubs doesn’t affect me, since I only go to one bar [The Hog Wallow].

SLUG: Would you rather be brewing in any other state?
Jackson: Every day that I am in Utah it just becomes a radder and radder place. I know everyone that brews in this state, it’s a tight knit community. Today I talked to Kevin Templin (Red Rock), Chris Haas (Desert Edge), and Kevin Ely (Uinta). There isn’t that air of competition—we are all in it for the same purpose.

SLUG: The majority of beer drinkers in this state bitch about the alcohol volume in their beer. Does that bother you as a brewer?
Jackson: Not really. We brew all lagers, so we are maybe a half of a percentile off of the style. When it does come time and the law gets passed, and I am sure it will, we will probably add that half of a percent.

SLUG: How is this recession affecting you?
Jackson: I am in a recession resistant line of work. I don’t have a car payment, I don’t own a home, and I don’t have a stock portfolio. My biggest gripe about the recession is fucking hearing about it.

SLUG: A lot of the local breweries are getting in on this high-point trend. Can we expect the Bohemian to jump on this wagon?
Jackson: It gets tossed around occasionally, but it’s mostly at 11:30 at night with me and Joe Petras [owner of the Bohemian] at the bar. We have talked about maybe making the Cherny a little bit higher and bottling it, but it is competing with so many other things that we are doing right now.

SLUG: Is there anything that Bohemian drinkers of Utah should look out for?
Jackson: Hopefully by the end of the summer we will be releasing the Vienna in a can, and around Christmas-time, the Cherny Bock. Very informally, expect mixed packs shortly thereafter.

SLUG: A head brewer is only as good as his team, wanna mention them?
Jackson: We are down to two now, it’s just Kyle Schwenk and I. I hired him out of Illinois about six to seven months ago and he’s been kickin’ ass here.

SLUG: Getting your Brew-Chi is very important, what music can we expect to hear blasting out of the brewery?
Jackson: Oh Jesus, I listen to a lot of Tom Waits, Jenny Lewis, Modest Mouse, Location Location, shit, everything. Kyle likes The Grateful Dead, but we mostly will be rockin’ KRCL. I used to leave the music on for the beer, like the baby in the womb, but it always seems to get shut off.

SLUG: Finally, it’s the night capper. You are sitting at the bar, about to leave the brewery, what’s in your glass?
Jackson: The Cherny.


Original Post
Posted by Bohemian Brewery - Salt Lake City at 11:22 AM No comments: